Since muscle testing is a function of energy, and not of physical strength, e.c.c. can be done remotely.

Overview of an e.c.c Pilot Study

The graphs below show the results of an e.c.c. pilot study with fourteen volunteers in a recovery home in San Diego, California. After emotional complex clearing, as indicated on the first graph, subjects experienced dramatic reductions in depression, according to the Beck Depression Inventory. The second graph shows similar results, measured by the Multiple Affect Adjective Checklist, with corresponding decreases in anxiety and hostility as well. According to the Positive Affect scale, good feelings also increased.

This was a three week study with subjects receiving e.c.c. every day, excluding weekends. What is particularly notable is that most of the beneficial results were obtained at the mid-test. In other words, the study could likely have been stopped after only seven or eight sessions instead of the full fifteen, and the results would have been pretty much the same. This illustrates the value of dealing with Top Priority Items as indicated by muscle testing.

Subjects were enthused, optimistic, and even excited about their recovery as a result. But these findings and e.c.c. in particular should not be considered as a substitute for a more complete recovery program. What e.c.c. did in these cases, by healing the emotional traumas in the past, was to “pull the plug” on the source of the problem so that the addicts and alcoholics who took part had more of a choice about staying in recovery.

Results of the above e.c.c. Pilot Study 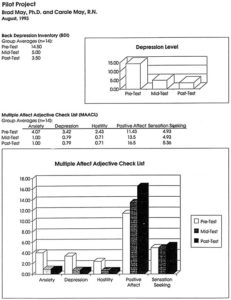 In September, 2003, eighteen males in Minneapolis, all of whom were victims of sexual abuse, took part in a study to assess the effectiveness of e.c.c. This was a placebo-controlled, partial-crossover design. In other words, half the subjects (randomly selected) received a placebo (or fake) treatment, designed to mimic the real clearing procedure, and then all the subjects received legitimate emotional complex clearing.

The men ranged in ages from thirty-two to sixty-seven. The average age was forty. They reported being abused sexually between the ages of two and sixteen, with the average age of abuse occurring at eight and one-half years. Three of them reported multiple perpetrators, while the rest had only a single perpetrator. Sixteen of them were (or had been) in therapy. Duration of therapy ranged from one year to thirty-one years (on and off). On average, they spent six and two-thirds years in therapy.

Of the eighteen subjects, seven were on medication for their resulting symptoms. These included depression (16 subjects), anxiety (16), intimacy problems (16), sleep disturbance (10), flashbacks (9.), nightmares (7), and panic (6).

The major measure of effectiveness was a S.U.D.S. (Subjective Units of Disturbance) scale. Subjects were asked to rate on this scale from zero (no disturbance) to ten (maximum disturbance) how distressed they were by the sexual abuse. Before any treatment, their ratings ranged from three to ten.

The placebo (or fake) treatment produced no decrease in any individual’s SUDS score. In other words, it was entirely ineffective. But the experimental treatment (e.c.c.) decreased scores to between one and six. Seventeen out of the eighteen subjects lowered their scores, and five individuals quite dramatically reported a SUDS level of one after the e.c.c. procedure, indicating the trauma was almost completely gone! All of this took place in only a four-hour workshop! In phone interviews, subjects reported that these gains were maintained at both one-month and three-month follow-ups.

During the follow-up interviews subjects 1 through 13 offered the following observations about their experiences. The decreases in their SUDS (Subjective Units of Disturbance) scales are in parentheses. Subjects were asked to rate on this scale from zero (no disturbance) to ten (maximum disturbance).